What is a hair transplant? 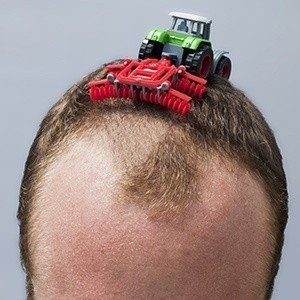 Hair transplantation is a transferred process made of the healthy hair that has not been lost and is in the back and sides of the head, to the regions having healthy hair losses. In order to perform a successful operation, The hair in the region where the hair follicles were taken has to be healthy and the density of hair has to be sufficiently. Hair color, becoming straight or curly also affects the outcome of the operation.

Stages of Hair Transplantation Operations are ; 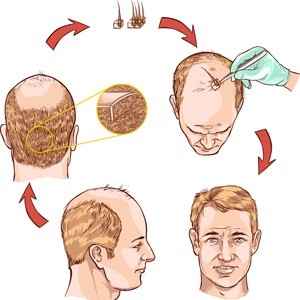 This is the process that Follicular Units ( hair follicle bundle) in the region of the nape are taken by micromotor one by one. This hair taken is individually transferred to the region bald areas.

The biggest advantage of FUE is not to leave a trace and can be able to take 3000 in minimum and 7000 graft in maximum according to the density of region. In this method, scalpel is definitely not used, it is not sutured to the region taken the hair. FUE is a hair transplantation technique which is the most widely used in today’s world.

It is the process that haired scalp is removed between the two ears by cutting in a strip shape and separated into individual follicular units(hair follicle bundle).

The biggest advantage of this method is not to be required the cut hair. As being sutured to the region taken hair, a trace remains as a very fine line. 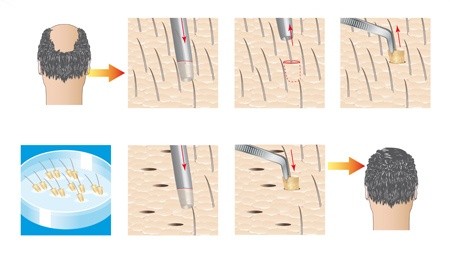 HOW SHOULD BE A FRONT HAIRLINE ?

The only reason of hair transplantation that you have seen in the form of lawn guy in social life has occured as a result of the lack of paying attention to these issues. More compatible the head shape of the hair line is, more successful for the transplantation process is made. If the appropriate hairline can not be drawn, it is very difficult to return and it is demanding study. If the hair line is at the far ahead, it will not be compatible in person’s old age and will not look naturally.

Setting the hair density in the region to be applied hair transplantation completely depends on the amount of grafts that will be obtained. amount of hair for one cm2 is between 80 and 100 grafts.

With a hair trasnplant operation, Maximum of 60 grafts per cm2 can be transplated. While the desired result is achieved with 25-30 grafts per cm2 for some people, 50-60 grafts per cm2 are required for other people. While setting density of hair, the expectation of person should be taken into consideration.

During the operation, people should be informed about how the density of their hair become. In accordance with this information given, people must form their expectations. Otherwise, person may not be happy, even if the operation performs successfully.

3 DAYS LATER: The first hair washing is performed and it is repeated once an each day

10 DAYS LATER: The shells in the region made the transplantation are lost and the hair appears like stubble.

20 DAYS LATER: Hair planted begins to lose temporarily and this process takes up to three months.

3 MONTHS LATER: Instead of the hair that has been lost, new ones begin to grow.

12 MONTHS LATER: Whole hair planted has grown and found its final version. If the area where the transplantation performed is very large, second session should be performed. For this, it is required to pass ar least 6-8 months. After a month from the operation, you can go to a hairdresser, but you should shave with a shaver and and scissors without using razor during 6 months.